Recognition of academic diplomas/degrees from abroad 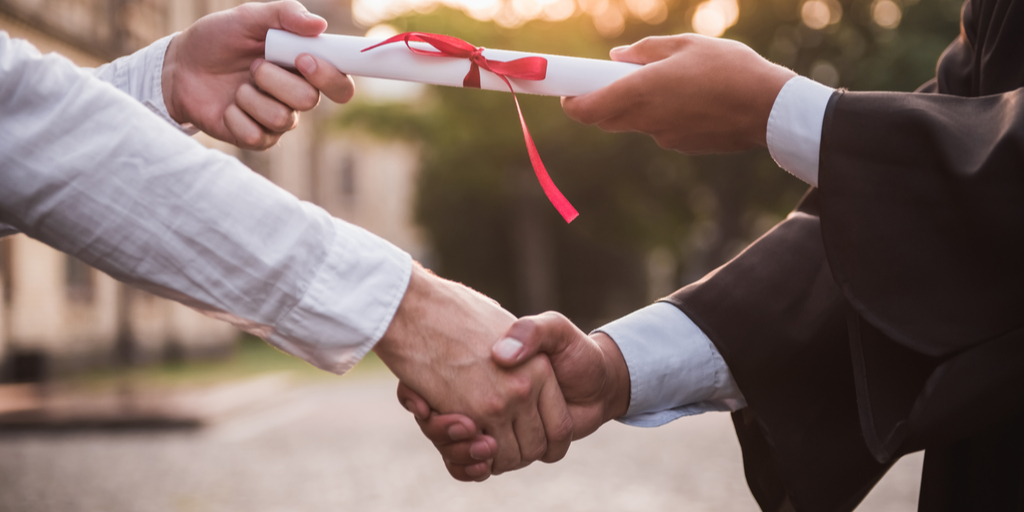 A common question is about recognition of a degree from SSBR being recognised in another country  where it is awarded.

There is no automatic worldwide or even European-wide recognition of academic diplomas. You may therefore need to go through a national procedure to get your academic degree or diploma recognised in another country, if you seek admission to a further course of study there. If you already know that you will eventually want to pursue further studies in a different country, check before you start whether your diploma will be recognised there.

Individual governments of EU countries remain responsible for their education systems and are free to apply their own rules, including whether or not to recognise academic qualifications obtained elsewhere.

Get your degree “compared”

In most cases, you can obtain a “statement of comparability” of your university degree, stating how it compares to the diplomas delivered in the EU country you are moving to. To do so, contact the ENIC/NARIC centre in the country where you would like your diplomas assessed for “comparability”.

This could be your home country if you return home after your studies, or another EU country if you move there for work or further study. Depending on the country where your diplomas are assessed and the purpose of the assessment, the ENIC/NARIC centre will either evaluate them itself, or transfer them to the competent authority.

Before the assessment, make sure you check:

A. How much the service will cost (if there is a fee)
B. How long the assessment will take – it could be several weeks to several months depending on the country, the purpose, and the complexity of your file
C. What type of document you will get as a result – it could be a full equivalency, or a comparative report
D. What you can do if you disagree with the assessment (how to appeal)

If you provide documents in the Europass format your degree can be more easily compared and recognised.

What is a regulated profession

As a general rule, a profession is regulated if you have to hold a specific degree to access the profession, sit special exams such as state exams and/or register with a professional body before you can practise it.

If your profession is regulated in the EU country where you want to practise, you may need to apply to get your professional qualification recognised there.

Homologisation is the approving a foreign degree in another country is to enable that person to work in the other country under equal conditions with respect to a person who has obtained the degree at a local university. It should be remembered that the number of foreign graduates already practicing in many countries has not stopped growing, and it is very common to be treated, for example, by a doctor who has completed his studies in another country.

Is homologating the same as validating a foreign title?

They are terms that can be confusing, since they are related, but they are not really the same. Approving a degree means giving recognition to studies that have been carried out abroad in order to develop a profession under the same conditions as your own country. However, validating some studies implies recognizing them to give continuity to them in the country.

Every country has its own rules, regulations and procedures, so you should find out how to do this in your own country.

How do most European countries work?

In Europe, the homologisation of higher education qualifications is ordinarily carried out at the Ministry of Education. First of all, it must be verified that the university degree is included in the list of regulated professions which comprehensively collects all diplomas and professions. The procedures can be started online.

Sample story – UK
Gabriel has completed a university degree in Egypt. He now lives and works in London and would like to work in the public sector, where a diploma from a legally recognised British university is required. Therefore, Gabriel has to  obtain a document certifying his qualifications.  Upon submitting a request for homologisation with the British authorities, he is able to get his degree recognised as equivalent to a “bachelor’s” degree – a type of diploma obtained there after only 3 years of study.

In many recruitment cases it is not necessary to present an approval of the diploma, especially in private companies and for certain professions, in which your original title and a translation may be enough for your candidacy to be taken into consideration for a position. But in certain professions, especially those governed by professional associations (architecture, law, medicine, …) and for positions in the public administration it is necessary to be in possession of the homologisation to complete the selection and recruitment procedures.

How long does the process take?

As it is a bureaucratic process, you have to have some patience when approving a degree as delays can become common. These procedures can be carried out online in most countries, which simplifies and speeds up the approval process. It is also always highly recommended to know what requirements are needed in advance. This process can take anywhere from a few months or more, and can go up to 14 months in exceptional cases.

How much does it cost to certify such degree?

The price of the homologisation of a university degree will vary from country to country, as it is regulated by each country’s national authorisites. However, there are many countries that legally recognise such  degrees, so check with your national authorities before beginning the process.

Sample story
Kathrin completed a university degree in Germany. She then moved to France to pursue a postgraduate degree, but found that the French authorities did not recognise her diploma, requesting that she obtain a document certifying her qualifications from a French university.After discussion with a French university, she was able to get her degree recognised as equivalent to a “licence” in the French system – a type of diploma obtained there after only 3 years of study, and which she felt covered much less ground than the studies she had already completed in Germany. Nonetheless, she had to pursue 2 further years of undergraduate study in the French system before she could apply for the postgraduate course she wanted there.

Swiss School of Business Research is an accredited school with the educational authorities.

There are a few exceptions in certain fields, such as Medicine, Law and Accounting, that are country-specific and for which you normally need a bridge or to pass a certain exam to get equivalency.

Every country has its own rules, regulations and procedures, so you should find out how to do this in your own country. In many countries this is a long slow process taking up to a year.

Such type of education does have a good reputation worldwide and for the majority of most professional career positions it is not necessary to present an approval of the diploma, especially in private companies and for certain professions, in which your original title and a translation may be enough for your candidacy to be taken into consideration for a position.

Receive our newsletter directly in your inbox every 2 months and stay up-to-date on our events, workshops, programmes and much more!

This will close in 0 seconds

WhatsApp Chat is free, download and try it now here!